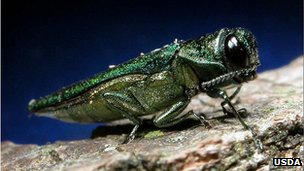 A. planipennis: The insect has already killed millions of trees in North America
An insect that has killed more than 99% of North American ash trees it has infested could be heading to the UK, according to scientists.

The emerald ash borer is a beetle that is native to Asia and eastern Russia, but entered into North America around 2002.

It has now been found west of Moscow and scientists believe it is heading towards Europe.

They made their comments on the BBC Radio 4 documentary Ashes to Ashes. Common ash, which is widely found growing in the UK, has been found to be susceptible to the insect.

Emerald ash borer (Agrilus planipennis) is a small green-coloured beetle that co-evolved with Manchurian ash and other native ash in Asia. In its native environment, the emerald ash borer does not harm the ash trees it infests. It is also found in far fewer numbers.

But in North America, it has devastated ash wherever it has spread.

Prof Steve Woodward, a tree pathologist from the University of Aberdeen, says he is alarmed at the effect it is having.

"The problem is: once it's spread out of Asia, out of maybe China, then ash species it's encountering along the way show no resistance to it. "It's now in the eastern part of the USA, where it's killed literally tens of millions of ash trees over the last 10 to 12 years."

Much effort and money is being now put into trying to find out more about ash dieback, which is caused by the fungus Chalara fraxinea. Research into finding trees that appear to be tolerant to the ash dieback fungus is ongoing across Europe. But Prof Woodward believes we also need to be looking at the potential threat from the emerald ash borer.

"Some of these ash trees may show some tolerance or resistance to being infected by Chalara. The problem with then jumping on that as though it's a great solution to the problem of ash and the loss of ash is that those trees may be susceptible to other things.

"Now, it's highly, highly likely that they will still remain highly susceptible to the emerald ash borer, which although is not in western Europe yet is in the geographical area of Europe. It's about 250km to the west of Moscow and is spreading westwards." 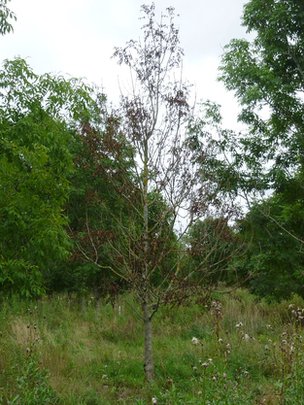 The Forestry Commission is aware of the potential threat. It told the BBC: "Emerald ash borer is unlikely to reach the UK for many years. Strict rules are in place to minimise the risk of it being introduced to the UK, and we are currently looking at ways to further reduce the threat."

Prof Enrico Bonello, from Ohio State University in Columbus, Ohio, has been studying resistance of ash to the emerald ash borer. He says it was first detected in the Detroit area in 2002. Currently, scientists think it was imported on wood packaging from Asia. Prof Bonello was invited to speak at the European Cooperation in Science and Technology (COST) FRAXBACK meeting in Malmo, Sweden.

He told the delegates that common ash, found across Europe, is susceptible to the devastating effects of emerald ash borer. The insect infests the tree by laying eggs on the bark. The developing larvae then burrow inside the tree, eating the tissue that allows water and nutrients to be transported.

"When you have mass attacks on the tree, you have thousands of larvae acting at once. Essentially, you're starving the root system and the tree dies."

The trees die within two or three years of being infested.

Dr Eric Allen, from Natural Resources Canada, the Canadian Forest Service, believes that the future for ash in North America and Europe is very bleak. He thinks that ash will go the same way as chestnut 100 years ago in eastern North America, which was decimated by chestnut blight. A few young trees do survive, but they die before they mature.

He says: "I think it's fair to say that the ash population in both Europe and North America are seriously threatened."

Scientists suspect that our ash trees are susceptible to Chalara fraxineaand emerald ash borer because both are imported. So, the North American ash trees and our European ash have not co-evolved with these threats, and so have not had the chance to evolve any defences. Both emerald ash borer and Chalara fraxinea happily co-exist with Manchurian ash in Japan and throughout Asia.

Dr Richard Buggs, from Queen Mary University of London, thinks the key to protecting our ash and what is left of the ash in North America could lie with the seemingly healthy Manchurian ash trees in Asia.

"In the future, we probably need ash trees that are resistant to both ash dieback and the emerald ash borer. "And Manchurian ash, as it does seem to have co-evolved with both of these, is a really good candidate for a tree that could give us clues as to how we could have resistance to both of these pests."

Ashes to Ashes is presented by Prof Adam Hart and produced by Ania Lichtarowicz. It is broadcast on BBC Radio 4 at 1100 BST on Friday 27 September. It will then be available to listen again on the iPlayer.