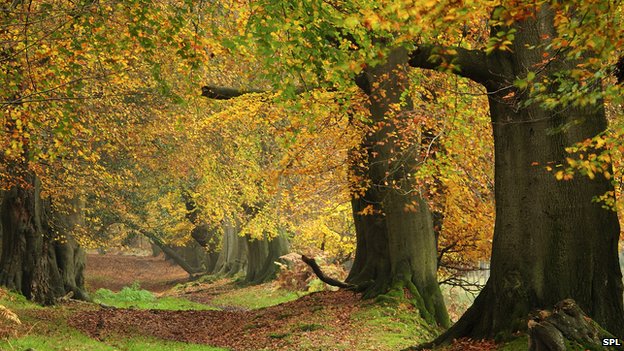 The sizzling summer of 1976 caused permanent changes to British forests, new research suggests. Scientists found that the long dry spell that year - the UK's most intense drought between 1914 and 2006 - killed off many drought-sensitive beech trees.

Growth of the trees is still restricted more than 30 years later, a study in the journal Functional Ecology said.

The more drought-tolerant Sessile Oak survived better and is now dominating the beech.
"They are resistant up to a point and then we hit a tipping point and the system shows very severe impacts”
Prof Alistair Jump University of Stirling

The scientific work was carried out at Lady Wood Park in the Wye Valley. This 45 hectare (111 acre) site is a national nature reserve and is attractive to researchers because it has been deliberately unmanaged since 1945. Detailed forest surveys have been carried out in the park over the past 70 years and the ecologists were able to use these along with tree ring data to discover how the different tree species fared over the period.

Before 1976, beech was the dominant species in this area. But that summer's drought has permanently changed the makeup of the forest. That dry spell was the most exceptional drought in the years between 1914 and 2006 - it was 30% more intense than the next driest year, 1921.

The researchers found that in the period immediately after 1976, there was a significant growth in beech mortality. Between 1977 and 1992, 17% of these trees died, while there were no deaths among the oaks.

"The beech growth dropped very suddenly," said Prof Alistair Jump from the University of Stirling who carried out the work along with researchers from Joint Nature Conservation Committee.

"The Sessile Oak which is slightly less competitive but is more drought tolerant took advantage and grew much better - and beech has never fully recovered in the system."

"I think tipping point is a key idea, and that's something that we see very clearly in the work," said Prof Jump.

The researchers say they expect the changes that they recorded at Lady Park Wood to have been replicated across the UK. This perspective is echoed by Ray Townsend, arboretum manager at the Royal Botanic Gardens, at Kew. He lived through the drought of 1976 and owns a home in the New Forest and he has been spending a good deal of time among the beech trees there in recent months.

"Quite clearly you can see that the beech aren't happy," he told BBC News.

"You can see evidence of the restriction of growth - I've seen that, the beech don't look as they should look - The oaks seem to be growing well, I'd never really thought about the reasons, but reading the research paper, it makes sense in a way."

The study's authors believe that extreme events such as the drought of 1976 are likely to increase in frequency in the future and there could be similar implications for other tree species.

To cope with these events, they say that forest managers need to manipulate the mix of species in their woods. But despite the extreme heat of the last few weeks, the scientists say that 2013 will not have the same impact on trees as the dry days of '76. That year was exceptional as it followed on from a rain-free 1975. "This summer it won't happen," said Prof Jump.

"Last year we were at the point where we were forecast to exceed the 1976 drought and then we had this phenomenal amount of rain - that replenished the water supplies and that means for this year it would be highly unlikely."